If you would like to receive greater recognition, monetary prizes, awards and exposure for your books, here is an opportunity not to miss. Enter the 2022 Next Generation Indie Book Awards.

Take advantage of this offer and enter by September 30, 2021 and receive the second category for free! Final Deadline: February 11, 2022

In an era long ago when the captain of a Viking ship died, his family and ship’s crew would place the captain in his longboat, set the ship afire and release it onto the outgoing tide to carry the captain to Valhalla.

My husband was born in Norway. He loved nothing better than to be on a boat. On summer visits with him to the village of his childhood on the east coast of Norway, he took me on magical rides in his father’s old wooden boat, out in the sunlight to the skerries protecting the harbor, into deep shady fjords, onto tiny hidden beaches. Then, from the terrace of his parents’ home above the town, we would sit long after bedtime looking out to a glimmering sea where the sun left its glow until midnight. Geirr was at peace there.

We spent most of our careers in New York, at a pace far removed from that of his sleepy Norwegian town. When the opportunity came to move from Manhattan to a little house on a little canal in Queens, we began to float again. Every late afternoon from June through October we packed a cooler and a camera and idled our way around Jamaica Bay, past the Rockaways and Marine Park. On weekends we might venture further, around Coney Island and into New York Harbor for a glimpse of the Statue of Liberty.

In Norway, pleasure boats are not often given names. But in America every boat, every ship, every dinghy has a name. Our first Luhrs, a 28-foot single-engine cabin cruiser with a wooden superstructure, we named Murphy in honor of the law stating that anything that can go wrong will. She was a troublesome boat.

The Peaquod was our little Boston Whaler, deliberately misspelled to avoid confusion with the boat that pursued Moby Dick. Afternoons in that boat were the outings where we felt most attuned to our watery world. To reach across the gunwale and run a hand through the water was to remind us we were in the sea, not merely on it.

But our fanciest boat, a 32-foot Luhrs with twin engines and what I called a stripper pole below deck, was named Sweet Thursday in honor of Geirr’s favorite author, John Steinbeck. That boat was where we entertained on summer afternoons.

A gaggle of my girlfriends [we called ourselves the Beauty Queens because of our shared experience in the cosmetics business], visitors from Nashville or Dayton or Europe – all were eager for a ride on the Sweet Thursday.

When it came time for us to move, our neighbor across the canal inherited that sweet boat. John continued the Geirr’s tradition of the annual Chicken and Beer Cruise, packing a dozen local guys on board for an afternoon afloat. No women were ever invited on that cruise, which suited us wives fine. While the men motored about, we would gather on the dock for white wine and a testosterone-free chat, with the grill readied to welcome our sea warriors home.

Dementia makes strange changes in the personality, the preferences, the very nature of the person. Among other disappearances, Geirr lost all interest in the boating life. For the first time in my life with him, he showed fear of the sea. This was the man with whom I had sailed around the southern tip of Norway in a fresh gale while I cringed and he whistled. And now this same man needed to be coaxed into a bathtub.

In his last days, when we had said all there was to say, I read to Geirr. Cannery Row. His beloved Travis McGee series by John MacDonald. The poems of Wallace Stevens. And of course, tales of the sea. Sometimes I imagined I saw him smile. It gave me comfort to think that I might have helped ease him from this world which had become so alien to him.

And so, when he was gone except for ashes, I felt the need to give him back to the sea that had given him such life-long joy. The ridiculous idea of a Viking funeral began to take root. I talked to some friends. My brother found a Viking ship replica. Geirr’s sister promised to fly over with her husband from Norway. John offered the Sweet Thursday to lead the funeral cortege.

On a beautiful Saturday in mid-September, two months after Geirr left this earth, we sent his ashes out to sea. Friends and family from near and away boarded the Sweet Thursday to escort Geirr as he began his final voyage. In our imagination, that journey would be out of Jamaica Bay New York, into the Gulfstream, and home to Norway.

My brother Jim had tricked out the Viking ship replica so that it would both float and burn. As we set the ship on its way in flames, the Sweet Thursday was joined by a half dozen friends’ boats to create a protective circle around the ceremonial pyre. We listened to “Crossing the Bar,” a beautiful old hymn about life’s final voyage. Tears flowed freely. I opened Geirr’s bottle of 30-year-old Macallan, which he had saved for a special occasion, to toast a life we had all cherished.

Back at the dock of the yacht club, we told “Geirr stories” well into the evening. In that moment I came to understand the meaning of the term “celebration of life.” Many of the stories were sweet, some were raucous, a few had never been told before, and together they swelled into a stew of many rich flavors.

And now, three years later, Geirr’s memory remains alive. I often share “Geirr stories” with new Florida friends who never knew him in life but who now know him through the stories I tell. I encourage all whose loved ones have gone to tell the stories of those lost lives. There, in the telling, life does go on.

But rather on this
Superlative August 8
Eightieth Birthday
From the one who needs
And wants and loves you
Better than all:
Happy 80th Birthday!

FOR MARJORIE AT SEVENTY-NINE

No truth to learn at seventy-nine
Except that living on is fine.
So many friends now turned to dust,
Their camaraderie once robust.
A few, surviving faint and frail,
Now faraway as memories fail.
No unlived dream for which to yearn —
At seventy-nine not much to learn,

Except sometimes the past unwinds
And leaves a word or thought behind,
A song or phrase recalls a scene —
The world was old at seventeen
But still too young for “might have been”
Before the births and deaths begin —
Now living on is fine
At seventy-nine.

You’ve got your true love at your side
To share the times we’ve laughed and cried,
Our magic moments still alive
For love has helped them to survive.
“Together” is now a precious word,
The sweetest song we’ve ever heard
And each new day a Valentine
To share together — at seventy-nine.

No need for old age solitaire
Sheltered in places with despair,
No time to waste remembering when
“Remember was” will come again:
The present’s a wide and shining place
For past and future to embrace
And living on is just divine
At seventy-nine.

(FROM SANIBEL JOE AT NINETY)

I thought at first
The cataracts had come back —
the sun glinting cold and yellow
over the tennis courts
brought out the Bollé glasses.

Nor was noon better —
the sun still low and stuck in time
as I drove on the causeway
to and from
the mainland mall madness,
gray gulf and sky,
whatever shred was left of day
shrouded in jaundiced twilight.

For once I was relieved
to see night begin
with Venus burning bright
and low like a jetliner
and even lower on the horizon —
the thin crescent of moon
slivering into renewal.

From darkest day had come
most shining night
and on this longest night
of my longest year —
the promise
of ever-brightening days
waiting to rise
above my horizons.

I could die in this house

“Eclipse” is a villanelle which appears in my weekly poetry column, “Poetry Place” at SantivaChronicle.com

“Orlando” has been published in the 2018 Winter issue of Pen Woman magazine, a national publication of the oldest literary organization for women in the US.

I have driven through you,
I have stayed in your city—
Visited Disney with my daughter.

Still… Orlando, I had to be
almost three thousand miles away
to be touched by you,
to be at the edge of tears.

The Rose Bowl Parade, bands marching,
flower-filled floats, the pageantry, then
you arrive in a rainbow of bloom,

white stars on a blood-red sea,
a dove rising. The message—
Honor and Remember Orlando.

A cold and shrouded January sky,
a slow procession as the crowd
claps chilled hands. Hearts fill
and spill for you, Orlando.

I was horrified after the shooting,
glued to the screen as the tragedy
unfolded, yet no tears fell,

Orlando—until this flower-filled
morning of hope and healing,
at the beginning of this New Year. 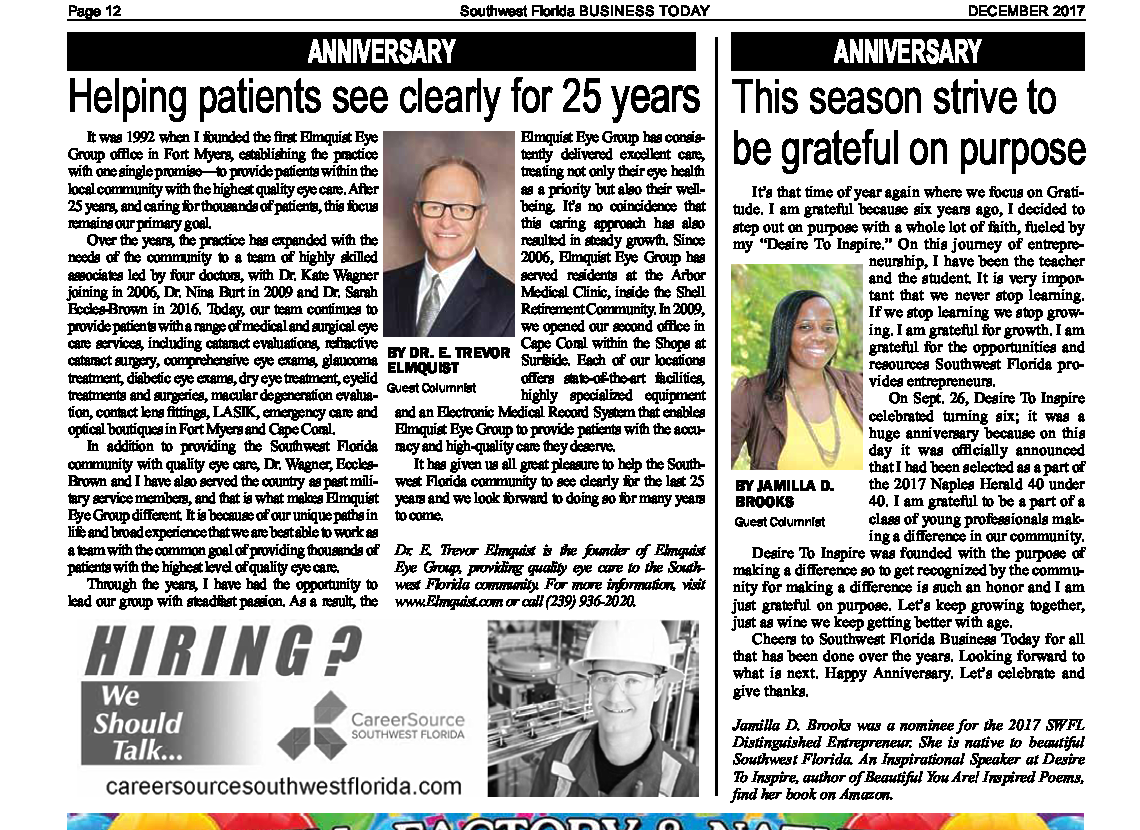