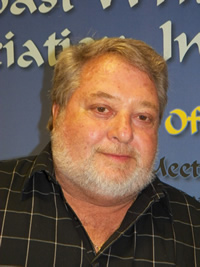 Henry Heitmann, author of Pocket Full of Tales; More Tales and Bits and Pieces; Looking Back On Life, all published by Monarch Books, Florida.

Henry (Hank) Heitmann has garnered a number of writing contest awards during the last few years from The GCWA of Mississippi, The Florida Weekly (poetry), Dreamquest Summer 2015, and the ABC 2016 Anthology of Florida Writers and Poets Competition.

Hank and I met for talk, breakfast and coffee at Marko’s Diner on San Carlos Blvd., recently. I was pleasantly surprised by Hank’s South Bronx accent, a near total contrast to the quiet voice in his poetic reflections and his poignant “Tales.” His educational experiences with Special Ed. students and teachers provided Hank with all kinds of stories. He admits that he’s been telling the stories for years, but he decided as soon as he retired that he would start writing them.

I stir more milk into my coffee and ask him how it’s going. Hank’s big brown eyes roll up at me.

“What I’ve heard and seen is what I try to get down on paper. The stories have been working my head for a long time, and retirement seemed like the time to write them out so I could share them. My wife encourages me, luckily, without her, I don’t think there’d be many stories written down.”

“I went to a GCWA meeting about five years ago and just randomly sat down next to Ken Feeley. Over a few meetings, he became my mentor. I also got valuable feedback from Ruben and Tim. I met other writers and learned about publishing and writing from them. What ended up happening… GCWA gave me the self-image of a writer, it put me in the midst of other writers, made me feel at home.”

Hank talked about his special relationship with books that began in his grandmother’s house back there in the Bronx. While other kids saved nickels for  Bazooka bubble-gum, Hank saved up to buy books. What about books, now, I ask.

“I like to hold a book in my hand. Even with all of the Kindles and Nooks and variety of ‘pads’ and screens, there’s still room for paper. Keep in mind, books are less harmful to the environment.”

Really? I thought paper books cost trees. What do you mean, exactly?

“I’d rather spend money on books than money on weapons of war,” Hank says, and I don’t have a rejoinder beyond a grunt.

Since Hank has mentioned money, I wonder aloud how he’s doing with the writing-publishing-marketing cycle. He gives me the slow, sad look I’ve seen on the faces of many writers who thought the work of writing was the be-all-and-end-all, the brass ring at their fingertips. “Marketing,” his voice trails off. Hank has worked diligently to complete all of his beginnings. Three books have pretty much left his cupboard of drafts, bare.

“I want to write a novel,” he says, “got one started called Out of Nonna’s Kitchen, It’s a sort of mystery-cookbook story.” His eyes find mine to see if I get it. I’m hoping I don’t squint a doubting glance. I know how that feels, and he does too, as he explains the plot to me, which I promise not to reveal to anyone else.

Before we go, Hank signs three books for me, and since I’ve already read a number of his stories, I’m eagerly heading home for a “Hanksta” fix. A sample: Still Dreaming – “Sitting on the dock/In the early morning sun/The tiny ripples on the lake/Beating out a gentle rhythm/A part of nature’s breathing/And giving life to ancient daydreams.”

The breakfast at Marko’s is what gives Diners their beloved place in American lore. Hank has hardly touched his abundant serving of eggs, hash browns, sausage and gravy. “There’s a sense of permanence in print,” he says, “I can pass it along to my family and friends. A new found passion in life is a good thing.”