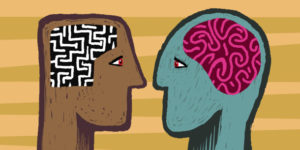 As a follow up to a previous article, and my usual quest to examine the differences between men and women, I asked around to find the answer to one more question.  I asked at work, and then posted it on social media.  If you could change one thing about your significant other, what would it be?  Would you want them to talk less?  Laugh more?  Change their hairstyle or clothing choice?  Or possibly have an attitude adjustment.

Quite a few women said, “I would change his attention span, or his lack of communication.”

Men joked around by saying, “I would change her nagging, or her decision making.”

Mostly, men echoed complaints about how women take forever to get ready.

“When my girlfriend promises to be ready in five minutes, that five minutes shouldn’t really mean 30,” said a handsome 20-something.

“Guys don’t have a clue what it’s like to walk in 3 to 6 inch heels,” I said, in defense of my stylish mama’s.  “Deciding what to wear just based on your shoes takes time.”

Another guy told me, “My girl is too passive.  I don’t like to pull things out of her head.”

I found that interesting to hear from a man.

Along the lines of being passive, another guy stated clearly, “She should be more assertive in the bedroom.”

Following was a women that mentioned her man was boring and she felt like tapping the walls while they were having sex.

I wondered if by simply communicating with one another, those things could change.  Because it’s such a sensitive subject no one wants to be vulnerable enough to bring it up.  All of these complaints could have a remedy if we were honest with one another.   And even if they didn’t change, making someone aware of how you feel could release you from possible resentment.

A new dad in his 40’s answers the question by saying, “I would change everything!”

Apparently the lack of sleep is getting to him.

On-line a male friend on Facebook said he would change his first wife’s problem with infidelity.  For wife number two, he would miraculously alleviate her manipulative skills.  And wife number three?

“That will never happen!” He said.

I can’t say I blame him.

While still on Facebook, several women said they wish their men weren’t so cheap.  Others wished their men didn’t spend so much money.  Women agreed that they would want their men to be more exciting, because sitting at home every day is just not enough to keep the spark going.

I found it funny that men and women alike would both change things like snoring, belching, cleaning, smoking, and the amount of time they spend with their family.

After days of asking, it surprised me that both genders agreed they would change the amount of drinking their partner does.  One guy in his 30’s said, “I wish she realized how small she is.  When she drinks, I babysit.  And I don’t mean the kids.”

The one that stood out the most however was when one lady, also in her 30’s said, “He has been drunk every day for the last 10 years!”

She clearly did not want to deal with it anymore.

Only one person, married for 20 years to her high school sweet heart, said, “I wouldn’t change a thing.”

After gathering this info I don’t really believe we are that different after all.  Most of us simply want meaningful relationships; partnerships.  We want to be recognized by the person standing next to us.  Though some extra finances and excitement don’t hurt either.

I’m pretty certain my significant other would say, “I wish she wasn’t so bossy.”

If only he just did what I asked him to do!  See— I don’t have a problem with the truth.  Do you?