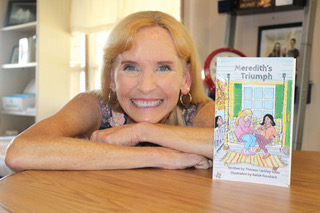 Theresa Corbley Siller has been a teacher in public schools and dance studios for 35 years. She has been published in two national magazines, Dance Studio Life and Guideposts. Her creative non-fiction essay, “Another Get-Together?” will be in The Magnolia Review Literary Journal, July 2021. Theresa has written articles for The Fairfax County Times and The Chambersburg Public Opinion, and her column, “Rising Stars,” appeared in the Cape Coral Daily Breeze Newspaper.

Theresa published From Torment to Triumph, A Story of Hope, in 2013, about her husband’s struggle with obesity, and the miracle of how he lost over 105 pounds and ran The Marine Corps Marathon on two titanium hips! She then published a story about Forgiveness, in 2019. Meredith’s Triumph, and What Happened at Soaring High Dance Academy? God Happened., were just released on Amazon, in 2021. Currently she is working on a new adult novel about standing up for yourself, and a children’s book about empathy, featuring Southwest Florida Wildlife and How They Feel. Theresa is grateful to God for her husband, Dan, their son-in-law Jesse, and their daughters, Michelle, Caroline and Christyanne.

Dan, Theresa’s husband, was the inspiration for two of her books. Dan was obese and miserable for decades. His bloodwork made his doctors howl. His triglycerides were 1600 (normal is 160). He had already had one heart attack. Finally, things would change. Theresa spotted a book, Overeaters Anonymous, and brought it home to her husband. The personal stories within resonated completely with Dan, and he began the journey that would change his life. He attended meetings and found a sponsor. The spiritual piece was what had been missing in all of the diets he tried and failed. Today with God’s help, Theresa’s husband is accountable about his calories in and exercise out, and has kept the weight off for 10 years. Nothing is impossible with God!