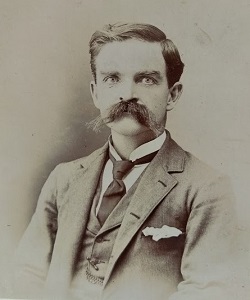 Mr. Blue is most recently from Vegas, and despite the rumors and photographic evidence, he did not work at Area 51 and has never met (several times) the aliens who reside there. Transition from desert to beach life has been a wonderful and welcome change for him. He finds that Krispy Kreme at dawn watching the waves meet the shore to be pretty inspiring.

Being a time traveler afforded Xander the opportunity to learn from various sources throughout multiple timelines. He has earned a couple degrees, and then there’s that Sumerian thing from 3142 BCE. It’s written in ancient Akkadian, and Mr. Blue just can’t figure out if it is a decree to vacate Sumer… or a degree. He would like to think it is the latter.

Creating / storytelling is something that just happens, Xander can’t stop it. He has been scribbling dialog and scenes in notebooks for many years. Many. It wasn’t until mid-1492 / early 2615 that he focused, allotted the time needed, and actually worked hard at finishing a book. His first novel, Whipping Up A New Past, was self-published thru Amazon in March, 2020.

Currently, Xander is working on two novels. The first is the tale of the daring-do of Janet, a futurepastian similar to Mr. Blue. She travels from the 23rd century to the American West of 1815 to live with a Native tribe. Some nights Xander just can’t sleep because he’s thinking about the trials Janet endures and the time traveling assassin that is plotting her demise.

The second is a romance based in 21st century Miami. It’s the typical modern Florida love story with murder, dark and light magic, a leprechaun bent on ruling the world, insane Fae, shifters, and a trip to Atlantis. Oh, and cereal. Lots of cereal.