The Way of Yeshua
by Valerie Galante, Ph.D. 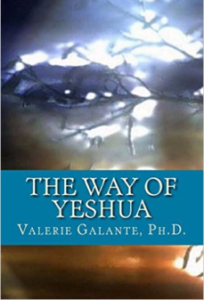 The Way of Yeshua is an exquisitely researched and beautifully written novel about destiny, human nature and purpose that is sure to appeal to people of all faiths and religious backgrounds.

In ancient Galilee, a male child is born.  His name is Yeshua and within days after his birth, Herod marks him for death forcing Yeshua’s family to flee into exile in Egypt.  This is only the first of many journeys Yeshua takes during his life; and, sadly, the first of many times his life is threatened. Mystery and mythology surround every aspect of Yeshua including his conception, birth, life, and death.  Some people say he was conceived by a virgin mother and that he is the son of G-d, a great teacher of the Law, keeper of the faith, and leader of his people. Others say he is a charlatan whose birth was illegitimate according to the Law.   Within the context of his personal challenges, Yeshua finds himself embroiled in the social, political, and religious conflicts of the time.  When the Romans begin denigrating his people, disrespecting their Law, and defiling their land, Yeshua’s mission becomes clear.  There will be no stopping this well-considered, fully human meticulous strategist until the prophecies of Isaiah and Zechariah are fulfilled. And fulfill them he does, by paying with his own life.  Or does he?

What if Yeshua did not die on the cross?  What if the death and resurrection of Yeshua is one of the greatest stories ever told, but it is untrue. Yeshua’s true impact on the world is even greater than the stories we know. And so, the story begins… [more]