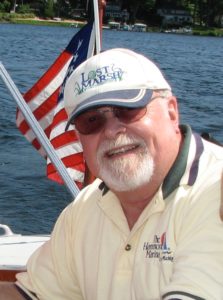 He also has published poetry and stories in various anthologies. Currently his poems appear monthly in The Whiskey Creek News of Ft. Myers—except in the summer months.

He received first prize in the 2019 GCWA writing contest for his non-fiction story, “Unvarnished Truth.” He has finished his second book, STONY ISLAND, from which “Unvarnished Truth” is taken.
He is an honorary member of the Society of Midland Authors.
Biography:
B.A. degree in English from Ohio Wesleyan, M.Div. from Colgate Rochester Divinity School. He was a chaplain at Cornell University, Administrative Director of Court Theatre at the Univ. of Chicago, President of the Yacht Sales division of Grebe Shipyard in Chicago, Director of Harbors for the City of Chicago, CEO of the Hammond Indiana Port Authority where he retired in 2005.
Bob is addicted to sailing having sailed across the Atlantic with two biddies following the route taken by Columbus on his first voyage, also from Newfoundland to the Arctic Circle and  throughout the Caribbean, and all the Great Lakes.
Robert’s books