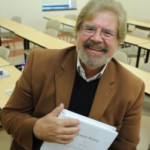 I’ve known many, many writers, who share a certain sense of ennui, and disappointment. Some rue their writing experiences in tales similar in tone to recollections of lost loves. Others fret about life’s distractions that steal time from writing. A few don’t discuss writing much, if at all. No writer I’ve come across has actually made good on threats or admonitions to “quit.”

I’ll bet William Faulkner intended to quit a few times, and he probably gave up on a number of efforts we’ll not likely hear about. Faulkner once said that 85 percent of a writer’s work goes unfinished. That leaves a tell-tale balance of 15 percent. Whether that’s believable or not, I trust his guesstimate. Imagine that a writer as talented and hard-working as William Faulkner could say such a thing. Fifteen Percent! Fifteen percent of all the work he hoped to finish at a rate of 100 percent.

All around this room, this den, this office, this… molders the Faulkner eighty-five. I hope the percentage of unfinished work is not higher, though it could be. What’s the point? Well, reading about writers reassures me that I am one, not a Faulkner, just a McLouth. When I sit at my desk, though, I think of Faulkner, hunched over a simple writing surface on his porch. He spends so much time and energy there, that it hurts mind, body and soul. He wants to finish. He wants to finish.

Like a practitioner of any art, a writer shares a range of indubitable duties with his/her peers. Knowing more about writers and writing makes us better artists, we hope, but a degree of camaraderie just high enough to keep us going is acceptable.

The primary job that a writer faces is to tell you a story out of human experience– I mean by that, universal mutual experience, the anguishes and troubles and griefs of the human heart, which is universal, without regard to race or time or condition. He wants to tell you something which has seemed to him so true, so moving, either comic or tragic, that it’s worth preserving.
~William Faulkner, 1962