The Strange Files
by J.C. Bruce 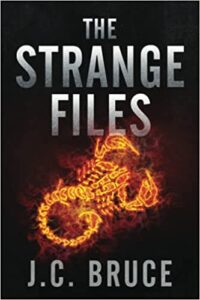 Phoenix newspaper columnist Alexander Strange enjoys his job writing about news of the weird, but his own life turns bizarre when shots riddle his uncle’s Scottsdale, Arizona home. Who would want Superior Court Judge Leonard D. Strano dead? And why? Alexander has twenty-four hours to find the answers or he’ll have a death on his hands. Maybe his own.To solve the mystery, he must cobble together an unlikely alliance of newspaper and television reporters, a sketchy bailiff, and a retired madam, all the while dodging the intrusive eyes of a pair of dubious FBI agents, packs of wild dogs, a freeway sniper, and an uncontrolled forest fire. And how in the world did he end up in those high heels?
Purchase at Amazon