A book review by Judy Loose 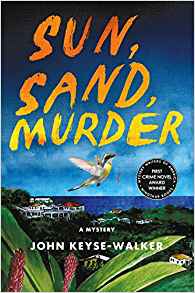 John Keyse-Walker was a speaker at the Gulf Coast Writers Association in January. He talked about his route to publishing through winning the 2015 Minotaur Books/Mystery Writers of America contest. Good speaker and contest winner—so I decided to read the book.

Aside from the Prologue, which was probably the suggestion of publisher or editor and almost kept me from continuing, the book was well written. The plot kept me guessing and the characters were delightful.

What captured my imagination was the setting and the people. I lived on a small cay in the Bahamas for a few years and have since visited several Caribbean islands. All have distinct personalities. But if you have ever spent time in the West Indies, you know there is a laid-back attitude—“island time.” It lingers in the air and the sunshine; it seeps into your bones and behavior. The author captured the atmosphere perfectly…I felt right at home in his story.

Teddy Creque is a special constable, a civilian position under the authority of the British Virgin Islands police, on the small, sparsely populated island of Amegada, where no crime has been committed in his twenty-plus years on the job. A research biologist who visited the island every winter is found murdered on the beach, and the BVI police commissioner assigns Teddy the job of notifying the family. But the murdered man was not who he appeared to be and Teddy becomes entangled in finding out who the biologist was and why he was killed.

I enjoyed every minute of this book, the story, the people, and most of all I loved the trip back into “island time.”