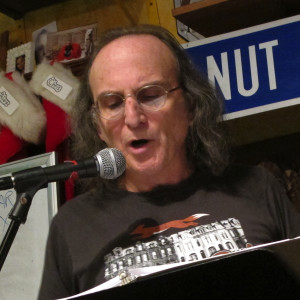 Richard Fox come from Worcester, Massachusetts, the town where people are “provoked to write,” according to American poetry icon, Stanley Kunitz. I’m not really sure what that means, but when Richard tells me he’s “compelled to write,” and that Elizabeth Bishop and Frank O’Hara also hale from Worchester, I get it.

And, just to make sure I’m focused, Richard explains that Worcester is a hot-bed of poets in the blue-collar-SLAM tradition, compared to Boston where a lot of academic poets are “working hard to write obscurely.” I’m reminded of something someone said once about T.S. Eliot, but Richard brings me back. “I started as a page poet, but I’ve squarely been into performance poetry the past three years, the SLAM poets seek the page and the page poets seek the stage—we end up in a similar place.” We quickly discover our admiration of Joe Pacheco’s page to presentation ability is mutual.

I’ve read a few of Richard’s poems written about his Uncle Louie, a man Richard knew as a child knows an adult uncle. Lots of husk, little seed. Richard tells me that he likes to “smash archetypes,” and the way he does that with Uncle Louie poems is to recreate the Uncle Archetype. “Reverse Engineering,” he calls it. “You have a  chance meeting with someone. You don’t know them, so you fill in their life story with pieces of other people’s stories. That’s what I’m doing with Uncle Louie, recreating him with stories I’ve heard over the years from my family. Each one of them knew different things about Uncle Louie, or even things that would describe Uncle Louie.”

In the process, Richard finds out that his Uncle Louie and his cohorts pulled some rather outrageous pranks in their time, especially when drinking was involved. Passing off Ex-Lax as chocolate on unsuspecting relatives, was one. Pissing into the gas tank of a disliked neighbor’s car was another. He’s not sure what to do with these vignettes of cruel fun, and how Richard continues with the Uncle Louie Poems is anyone’s guess. “It’s like potato chips,” he says, “you can’t stop at one or two.”

We turn to personal writing trivia and shop talk cherished by most writers. Richard has been winning his battle with oral cancer and I’m assuming that his experience has taught him multitudes about overcoming writers block. “You know what the definition of writers block is,” he asks. I’m ready for explanations of gnomic influences on writing practices, diet supplements and their side-effects, the writer’s mother’s relationship with God…

Richard Fox began writing over 50 years ago, and he hasn’t really stopped. The only thing that can stop him from writing is himself, and that is not going to happen, certainly not as a result of writers block. “When what you are writing doesn’t seem to be working, it doesn’t mean you’ve got writers block. It means you’ve decided to quit on that piece at that point. Okay, go onto something else.”  Richard doesn’t mean to sound unsympathetic to those of us who feel stuck with a piece of writing, rather he believes that like an athlete on a long running course, the writer may have to change speeds, alter the pace, pause for breath but never give up writing.

“I’ve found that being part of writing groups is essential, being in the company of other writers, building editing skills on other writers’ work, applying those skills to your own [work]. One project may peter out, but you need to pick up another one. Writing is all kinds of things. Hemingway is said to have said that drafting is best done drunk and editing sober. Whatever works, I say.”

Richard joined GCWA recently, and claims that although he likes being in different places, SW Florida is feeling pretty good to him. “Life slows down; people listen to you here. I’m one of the younger poets, whereas up north, I’m seen as an older poet, a voice of experience.”