The Little Dusties: The Roar of the Silver Dragon
by Bridges DelPonte 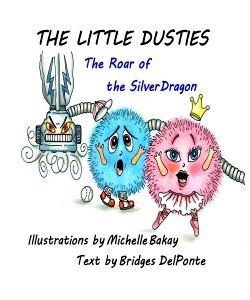 Snore. Tutu. Lefty. Mouse. Woof. The Little Dusties. These teeny little dust buddies live everywhere in a home, but no one knows they are there—except Ocho, the family’s sheep dog. In The Roar of the Silver Dragon, these tiny dust balls play all day and night, except for one day a week—Cleaning Day! On Saturday, the Little Dusties hide in Tutu’s closet to avoid the dreaded Silver Dragon that roars and scoops up all of the household dust. When the Silver Dragon makes a surprising appearance on a gray Thursday, the Little Dusties must work as a team to save Snore who got vacuumed up while napping. With Ocho’s help, the Little Dusties rally together and rescue Snore from the next morning’s trash pickup. This lovely picture book, aimed at ages 4-8, presents themes of friendship, teamwork and concern for others. Each teeny little dust ball has its own special qualities and whimsical illustrations to delight children of all backgrounds.

Bridles of Poseidon
by Bridges DelPonte 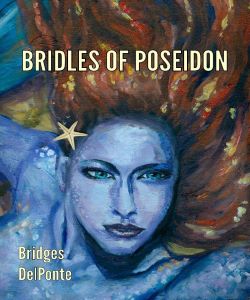 The last descendant of a dying race of deep ocean shape-shifters. A renegade Key West dive boat captain with a sketchy past. A reclusive billionaire with dark ties to undersea rebel forces. The imminent threat of another cataclysmic Great Flood. Aquan, a fearless Triton, uses her unique power to transform into real and mythical sea creatures to police the boundaries of land and sea from rebel forces. When her fellow Tritons are savagely massacred on the eve of her first mating season, Aquan reluctantly teams up with Key West dive boat captain, Dave Cutter and marine biologist, Jen Ortiz, in a world-wide adventure across the lost sister cities of Atlantis. In Bridles of Poseidon, Aquan must not only unlock her true power, but confront disturbing revelations about the deaths of her parents and dangerous political intrigue in her once-peaceful society at Rapture’s End. Ultimately, this young Triton faces a terrible choice between preventing another Great Deluge or destroying the future survival of her own underwater community, now torn apart by discord and treachery. This contemporary action fantasy is set in exotic locales as the first installment in a Last Emissary series of books. Bridles of Poseidon was also a 2012 finalist for the Royal Palm Literary Award (unpublished fantasy) of the Florida Writers Association. Rebooting standard myths about shape-shifters, this modern adventure fantasy will attract readers who enjoy strong heroines and who will be intrigued by her shifting identities, genders, races, and species—real and mythical. 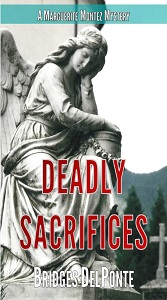 You always remember your first time….Monty’s first happened in St. Stephen’s church, directly beneath a statue of the Virgin Mary, right after morning mass. A local soccer mom is bludgeoned to death in her suburban parish chapel outside of Boston. In her first homicide case, prosecutor Marguerite “Monty” Montez endangers her life digging up evidence that shows police nabbed the wrong man. Moonlighting as a Portuguese fados (blues) singer, Monty’s investigation also uncovers disturbing memories and fresh leads in an unsolved murder of her childhood friend in her close-knit Portuguese community.  Her dauntless search for the real killer is a wild thrill ride into a dangerous world of lethal secrets. Action, humor and romance collide in this first book in a new Marguerite Montez mystery series.